From Cotton and Smoke: Łódź - Industrial City and Discourses of Asynchronous Modernity 1897-1994 – ebook 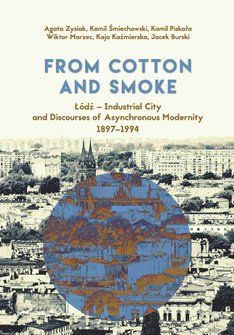 This book envisions Łódź, a city in present-day central Poland, the region’s textile industrial hub, to have been the capital of the Polish 19th century. Its history is a tale of struggle with modern change in Eastern Europe. The authors boldly challenge the romantic and noble-based Polish cultural imaginary, offering instead a revolutionary path to understanding confrontation with modernity in the region. The book examines local press debates during four pivotal periods, each of which stimulated self-reflection on the idea of the modern city: – Rapid industrial growth in the tsarist borderlands; – State crafting after WWI; – Socialist restructuring after 1945; – Transition and deindustrialization after 1989. Together these insights constitute a multi-faced portrait of 20th century urban experience beyond the metropolis, in different historical contexts. This innovative, interdisciplinary work deftly integrates urban and cultural history, historical sociology and discourse research. It will be of great value to Polish and Jewish studies’ specialists, as well as those in the field of Eastern European and Slavic studies. The book also addresses core intellectual debates within urban studies, modernity studies and historical discourse analysis worldwide.