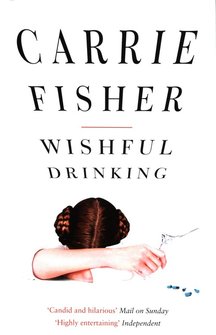 Wishful Drinking is a touching and incisive account of bipolarity, addiction and motherhood.' Independent 'No motive is pure. No one is good or bad - but a hearty mix of both. And sometimes life actually gives to you by taking away.' Carrie Fisher in Wishful DrinkingIn Wishful Drinking, Carrie Fisher told the true and intoxicating story of her life with inimitable wit.
Born to celebrity parents, she was picked to play a princess in a little movie called Star Wars when only 19 years old. "But it isn't all sweetness and light sabres." Alas, aside from a demanding career and her role as a single mother (not to mention the hyperspace hairdo), Carrie also spends her free time battling addiction and weathering the wild ride of manic depression. It's an incredible tale: from having Elizabeth Taylor as a stepmother, to marrying (and divorcing) Paul Simon, and from having the father of her daughter leave her for a man, to ultimately waking up one morning and finding a friend dead beside her in bed.
Carrie Fisher's star-studded career included roles in numerous films such as The Blues Brothers and When Harry Met Sally. She was the author of four bestselling novels, Surrender in the Pink, Delusions of Grandma, The Best Awful and Postcards from the Edge, which was made into a hit film starring Shirley MacLaine and Meryl Streep. Carrie's experience with addiction and mental illness - and her willingness to talk honestly about them - made her a sought-after speaker and respected advocate.
She was truly one of the most magical people to walk among us. Further praise for Carrie Fisher:-[Shockaholic] is the finest, funniest chronicler of the maddest celebrity mores.' Sunday Times'Fisher has a talent for lacerating insight that masquerades as carefree self-deprecation' Los Angeles Times'She is one of the rare inhabitants of La-La Land who can actually write' New York Times